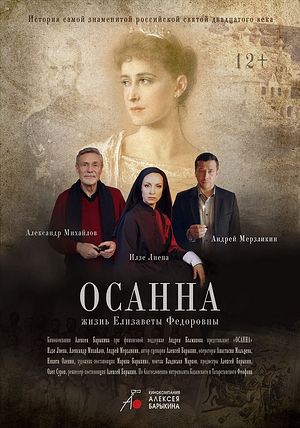 18 July 2018 in Kazan “cinema 5” (TRK “Park house”) will premiere the feature film “Hosanna” on the life of Elizabeth Feodorovna Romanova, sister of last Russian Empress, the press service of the Kazan diocese.

The picture was taken Kazan film crew headed by Director Alexei Barykin with the blessing of Metropolitan of Kazan and Tatarstan Theophanes and with the financial support of the Kazan patron of Andrei Kolmakov. The shooting took place in Jerusalem, Darmstadt, Wiesbaden, Kazan, Moscow, Yekaterinburg and Alapayevsk.

After the screening will be held a creative meeting with the filmmakers.

The premiere is timed to the centenary of the execution of the Royal family in Ekaterinburg and the murder of Elizabeth Feodorovna in Alapaevsk in 1918. In memory of these events the film will be shown at the same time in Kazan, Ekaterinburg and Alapaevsk, and later — in Moscow.

Much attention in the film is given a stay of Elizabeth Feodorovna in Kazan and its contribution to the improvement of the Cathedral in place of the appearance of the Kazan icon of the Mother of God, destroyed in 30-e years.

“Resurgent Cathedral of the Kazan icon of the Mother of God — the greatest sacred because it is associated with the fate of Russia. This magnificent temple, built on the site of the phenomenon of the Kazan image of the virgin, was destroyed by the godless power. Two years ago began the revival of the Cathedral.

When Grand Duchess Elizabeth decided to worship the Queen of Heaven in place of the appearance of Her Kazan image she noticed that there is something missing. Then, at his own expense Elisaveta Feodorovna arranged at the bottom of the Cave temple. Such buildings in Russia are no more.

The film “Hosanna” dedicated to the centenary of the martyrdom of the Grand Duchess. We believe that the Martyr before the Throne of God praying for all who visit this Holy place. She will forever remain in people’s memory,” — said the Metropolitan of Kazan and Tatarstan Theophanes.