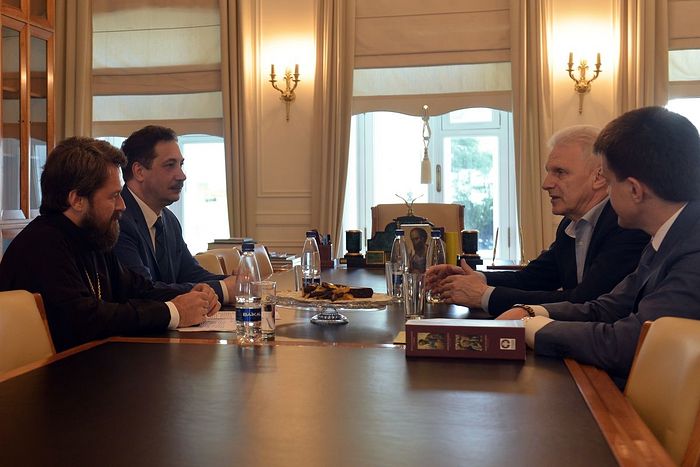 12 July 2018 Chairman of Department for external Church relations, rector of the Church postgraduate and doctoral school named saints Cyril and Methodius, the Chairman of the Interdepartmental coordinating group for teaching theology in universities, Metropolitan Hilarion of Volokolamsk met with the Minister of science and higher education of the Russian Federation M. M. by Katukova and Russian presidential aide Andrei Fursenko, reports patriarhiei. In the working meeting took part Vice-rector of the postgraduate school for research D. V. Shmonin.

The meeting was devoted to business issues of the development of theology as a field of knowledge and the modern system of theological education. The participants of the meeting it was noted that the successful implementation of initiatives for the development of theology in scientific and educational space, put forward by his Holiness Patriarch of Moscow and all Russia Kirill and supported by the President of the Russian Federation V. V. Putin became possible thanks to consolidation of efforts of Federal bodies of management of education and science, the coordinated work of ecclesiastical institutions responsible for the implementation of educational policy, education and education, effective collaboration with other religious organizations, members of the Interreligious Council of Russia, and also due to the open dialogue within the academic community, including scientific conferences, seminars, discussion boards, meetings, other forms of public discussion of problems of development of education and science.

The participants of the meeting noted that the new phase of theology may make a significant contribution to the quality of training of highly qualified personnel for religious organizations, teachers of higher and secondary schools, experts in the field of interreligious and Church-state, ethno-religious relations, become an important factor of sustainable development States, inter-religious peace and a form of broadcast traditional cultural and historical values of our country, including Church diplomatic term.

At the meeting, the sides discussed practical issues of further cooperation of bodies of management of education and science within the framework of the new structure of the Government of the Russian Federation with the Interagency coordinating group for teaching theology in universities. Metropolitan Hilarion told the gathering about the beginning of work created with the blessing of his Holiness Patriarch Kirill and with the support of the Interreligious Council of Russia Scientific-educational theological Association, founded by the INSTITUTE of Moscow state University named after M. V. Lomonosov, St. Petersburg state University, Moscow engineering physics Institute, Ranepa North-Caucasus Federal University, Moscow state pedagogical University, St. Tikhon’s University and MARKHI. After completion of reception of the first group of universities applying for membership in the Association, the NOTE will include not only a number of the leading universities of Moscow and St. Petersburg, a number of large regional universities, but also the leading theological schools of the Russian Orthodox Church and religious schools of other traditional religions, exercising their Ministry in Russia.

The participants of the meeting discussed a number of issues related to the support of higher education institutions, implementing educational programs in theology, the work of the expert Council of VAK in theology, the topic of determination of strategy of training of the theological staff of higher qualification tailored to the needs of religious organizations, as well as some other aspects of the industry. Particularly touched upon the organization and holding of the II all-Russian (with international participation) scientific conference “Theology in the modern scientific and educational space” that will be held in October-November 2018 on the grounds of the base institutions of the Scientific-educational theological Association and will end on November 2, main plenary session in Moscow.