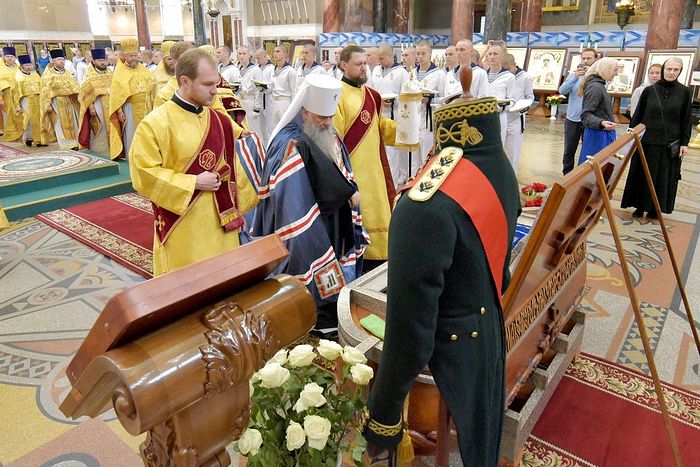 July 29, 2018, in a Week the 9th after the Pentecost, Metropolitan of St. Petersburg and Ladoga, Barsanuphius, celebrated the divine Liturgy at the Nicholas Naval Cathedral in Kronstadt, according to patriarhiei. On the last Sunday of July also marks the Day of the Navy of the Russian Federation.

Among the worshippers was the speaker of the Legislative Assembly Vyacheslav Makarov, the military personnel 907-th training battalion.

Singing at the service was the choir of St. Isaac’s Cathedral.

The Day of the Navy of the Sanaksar monastery of the Cathedral were brought the relics of the righteous warrior Feodor Ushakov. The ark was devoted to the glorification of the patron Saint of sailors.

“We sang the magnification to the glorified naval commander — Saint Theodore Ushakov, whose relics arrived here through the efforts of Lord Clement, the father superior of the monastery Sanaksar, — said the head of the St. Petersburg Metropolia. To commemorate the day of seafarers you, Lord, brought the relics of the righteous warrior, who blesses the troops in the service of the Fatherland. I wish you God’s help, prosperity Krasnoslobodskaya diocese and the Sanaksar monastery”.

“On this day we honor the sailors and wish them God’s help in Ministry. The Holy Church is always surrounded by soldiers with prayer, attention, care, understanding how important obedience they bring to the Fatherland. Wish you never faced a real war, but if it happens, would be able to sacrifice themselves for the homeland, for the people. To perform the feat, you have to be morally strong. Wicked deeds do not do, on the contrary, avoided the danger. And people of high moral life always ready for it, as the Holy warrior Fyodor Ushakov, who performed feats far away from home, but for the glory of it. May God by the prayers of the righteous warrior Feodor, Admiral of the Russian fleet, strengthens each of you who stands here tonight, his relics” — added Metropolitan Varsonofy. 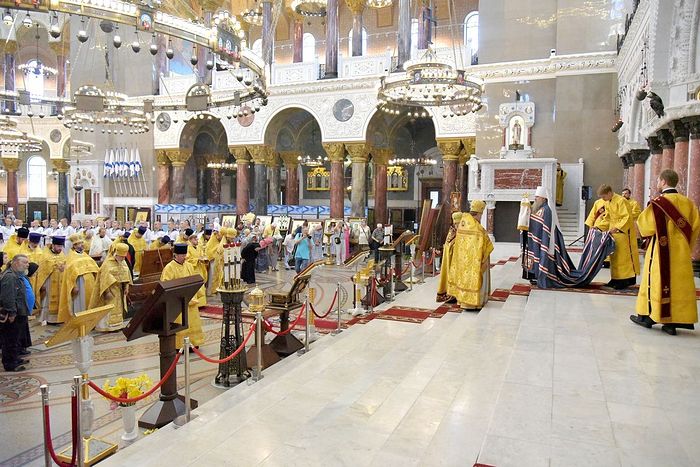 Bishop Clement, the head of the St. Petersburg Metropolia presented the icon of St. Nicholas the Wonderworker.

Naval Cathedral in Kronstadt was built in neo-Byzantine style according to the project of Vasily Kosyakov and consecrated in the presence of Emperor Nicholas II in 1913. In Soviet times it was used as a cinema, a concert hall, then it housed a branch of the naval Museum. In 2002, the Cathedral’s bell tower was a cross. December 19, 2005, the first in 75 years the divine Liturgy. Restoration work was carried out until spring 2013, which noted the 100th anniversary of the temple. The great consecration was held on 28 may of the same year. The next day, the Holy Synod decided to give it a stavropegic status, fitting the main temple of the Navy.