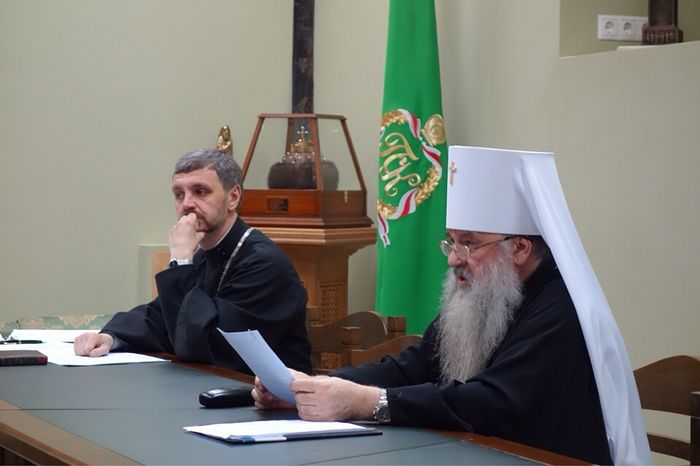 4 October 2018, at the Patriarchal and Synodal residence in the Danilov monastery in Moscow under the presidency of the Metropolitan of St. Petersburg and Ladoga Varsonofy, Chancellor of the Moscow Patriarchate, was held a regular meeting of the Commission on Church management, pastoral care and the organization of life Church inter-Council presence of the Russian Orthodox Church, reports patriarhiei.

The meeting was devoted to discussion of the draft document “Profession, compatible and incompatible with priesthood.” In its new edition was considered numerous conceptual reviews and fundamental comments to the original draft.

At the initiative of the most Reverend Metropolitan of Belgorod and Stary Oskol John was requested to correct the name of the document given the fact that in the legal field the term “profession” has a very narrow meaning and is determined by the official classifier of professions, the composition and structure of which is different in different countries. This is indicated by a number of critics of the original draft document. The proposed alternative — “On secular employment or other gainful activities of priests” (according to the sample document “On the participation of the faithful in the Eucharist”, adopted by the inter-Council presence).

After discussion, the next version of the document he was adopted by the Commission and sent to the drafting Committee inter-Council presence.

In the ensuing discussion, it was decided that the next meeting of the Commission on Church management, pastoral care and the organization of Church life will be devoted to summarizing conducted in the dioceses of the discussions on the theme “Priests: a calling, education in religious educational institutions, the problems of leaving Sana”, as well as the discussion of the working version of the Handbook for pastors with the recommendations of the Commission of the confessional, prepared by a working group under the leadership of the Bishop of Orekhovo-Zuevo Panteleimon.